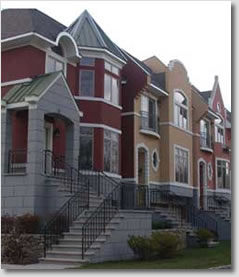 The Challenge:
A community that was perceived to be financially unviable, held up in legal litigation for years, partially built, vandalized and not built as originally intended. The consumer in this market had a negative opinion of this project.

The community of Le Chateau (Winding Creek) began construction about seven years ago. Soon after it opened for sale the community became involved in litigation, which extended over five years, and acquired the reputation of a failed and dormant project. Rumors were widespread that Le Chateau had gone bankrupt, not once, but three times.

The Solution:
Give the community a new identity and change the perception that potential purchasers have and “recreate” the project.

In 2000 the new builders, OTAP Oxford Holding Corp., in conjunction with the owners, hired ON-SITE Sales & Marketing to plan and manage a new marketing and sales program. Success of the program depended upon the coordination of key strategic elements, as detailed below.

First, Le Chateau was renamed Winding Creek at Old Tappan. Street names were changed. This served to incorporate images of the physical and location attributes of the community as well as eliminate names that had been associated with a perceived failed project.

Then, utilizing the existing and approved footprints and in conjunction with the builders’ architects, we updated and redesigned the floor plans. In those units that had already been built we reconstructed the homes to conform to the new and updated floor plans. The exterior stucco siding and roof tiles on the existing homes were replaced, upgraded and color coordinated to retain the original architectural integrity of the community.

With a view to developing Winding Creek at Old Tappan as a prestigious community, highly specialized and experienced advertising and public relations companies were hired, and ON-SITE Sales & Marketing provided two of the most successful sales people for luxury home communities in the area. An aggressive advertising campaign included new logos; brochures; advertorials in the local media; ads in The New York Times and The Bergen Record and other publications; area official, broker and co-broker events; a Grand Opening; and additional events to introduce initial and ongoing program phases.

Critical to the success of this comprehensive marketing and sales program was the creative interior design of three stunning model homes. All of the carefully orchestrated preliminary work to attract prospective buyers to the community would have been wasted unless those prospective buyers liked what they saw – and liked it better than what they had seen elsewhere. They had to be attracted to the setting, the community and the housing exterior. However, it was the interior space that had to capture their imagination and become their vision of “home.”

Each of the three models was merchandised to appeal to a different target market group: first-home buyers, families with children and empty-nesters.

The merchandising maximized the perception of spaciousness and the utilization of space. Color application and furniture arrangements gave pleasing definition to, yet enhanced the open design of, the floor plans.

The overall presentation was one of relaxed living that provided space for the family unit and for each individual. Upgrades, such as an elevator, finished basement area, granite countertops and wood flooring, were included throughout the models to encourage buyers to add to the luxury of their lifestyle in this prestigious community.

The Results:
A fast-selling, profitable community.

Two-thirds of the community was sold out in only ten months, representing over $23,000,000 in sales volume. By the end of the sales cycle, the selling prices were $150,000 more than when sales started under the guidance of ON-SITE Sales & Marketing. Now the reputation of the community is one of high quality and great success.

ON-SITE was also nationally recognized by the June 2003 issue of Builder Magazine as the reason that this community was named one of “America’s Best-Selling Communities”.